Terrorism and the Tribulation of the Kharijites 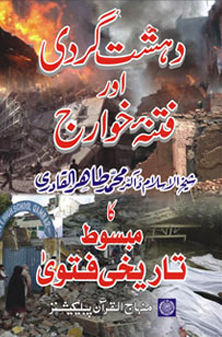 (A Historic Fatwa on Terrorism and Suicide Bombings)

A torturous spate of terrorism that continues unabated for last many years has brought Muslim Umma in general and Pakistan in particular into disrepute. There is no gainsaying the fact that the Muslims on the whole oppose and condemn terrorism in unequivocal terms and are not ready to accept it even as remotely related to Islam in any manner. However, a negligible minority amongst them seems to give it a tacit support. Instead of openly opposing and condemning terrorism, these people confuse the entire subject by resorting to misleading and perplexing discussions. Injustice being currently meted out to the Muslims in certain matters, double standards displayed by bigger powers and their open-ended and long-term military engagements in a number of countries, under the pretext of eliminating terror, form some of the fundamental local, national and international causes that underpin terrorism, and add a punch to the war cry of militants.

Similarly, the terrorists' recourse to violence, indiscriminate massacre of humanity, suicide bombings against innocent and peaceful people, and bomb blasts on Mosques, shrines, educational institutions, Bazaars, governmental buildings, trade centres, markets, security installations, and other public places, which are heinous, anti-human and barbarous steps in their very essence, have become a routine affair. These people justify their actions of human destruction and mass killing of hundreds of innocent people in the name of Jihad and thus distort, deform and confuse the entire Islamic concept of Jihad (holy struggle against evil). This situation is causing Muslims in general and the Muslim youth in particular to fall prey to doubts and reservations besides muddling their minds in respect of Jihad because those perpetrating these atrocities are from amongst Muslims. They practice Islamic rituals, perform acts of worship and wear appearance delineated in Sharia. This has put not only the common Muslims but a dominating majority of religious scholars and intellectuals too into a paradox, bewildered to know truly the exact and precise Islamic injunctions about the way of workings, methods and measures these individuals and groups have adopted to cause the havoc.