Shaykh-ul-Islam Speaks at the American Institute of Peace 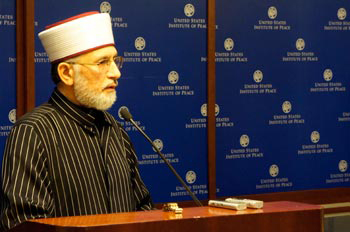 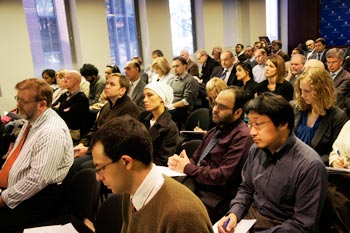 Shaykh-ul-Islam Dr Muhammad Tahir-ul-Qadri delivered a special lecture on “Islamic Concept of Jihad” at the US Institute of Peace on November 10, a prestigious think-tank. The audience comprised senior scholars, doctors, professors, engineers, policy makers and opinion leaders etc. Shaykh-ul-Islam who was on an important visit to the United States was accompanied by Sahibzada Hassan Mohi-ud-Din Qadri.

Speaking on the subject drastically misunderstood in the West, Shaykh-ul-Islam Dr Muhammad Tahir-ul-Qadri unflinchingly declared that the Islamic concept of Jihad offers guarantee for the establishment of global peace and a welfare-oriented commonwealth of nations. It is unfortunate, he denounced, that the so-called Jihadi groups misinterpret this concept and use it for their nefarious agenda. He said that these groups misinterpret the verses that particularly deal with the concept of Jihad in the Holy Quran in order to suit their evil objectives. Consequently, the concept of Jihad gets confined to killing, which is not the case in reality. 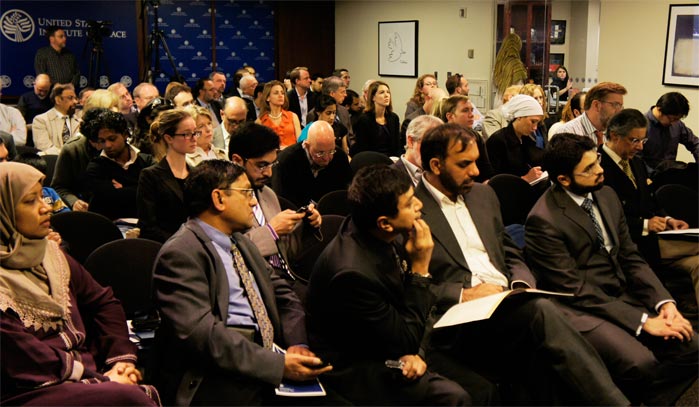 Highlighting various points about the Islamic concept of Jihad, Shaykh-ul-Islam said that the real concept, as described in the Holy Quran, does not ordain killing, fight and bloodshed. He said that out of 35 verses that deal with Jihad, thirty one (31) verses describe it in various shades and meanings without having anything to do with battle and killings. He stated categorically that he did not find even a single verse in the Holy Book in which Jihad and killing has been used together. These are two different words, which the Holy Quran has not put together at any place.

He said that the word ‘Jihad’ has been used to mean ‘defensive war’ in the Holy Quran. It is a situation when war is launched against a nation and it takes up arms to defend itself. Jihad, he maintained, is not an aggression. Rather it represents action for self-protection according to the Quranic concept. 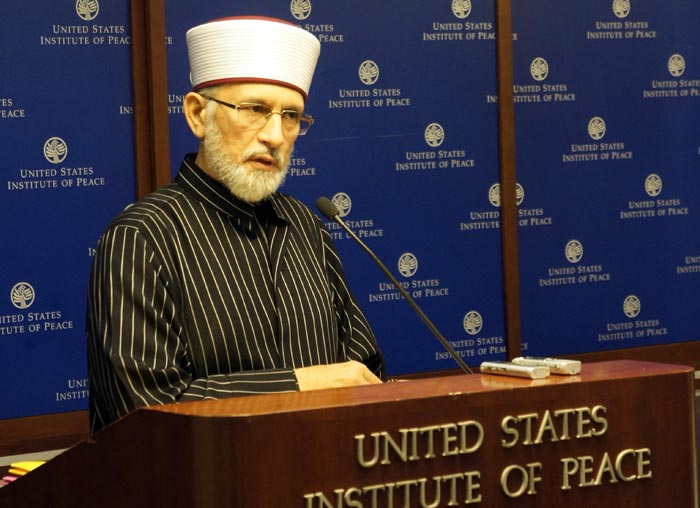 Referring to the holy life of the Prophet of Islam (S.A.W), Shaykh-ul-Islam Dr Muhammad Tahir-ul-Qadri said that the founder of Islam fought against different forces for thirteen years, only defending himself and his people. He did not attack the enemy forces on his own even in a single battle. He always fought back the aggression imposed on him by the enemy.

Shaykh-ul-Islam said that the five verses that mention ‘self-defence’ were revealed to the Holy Prophet (S.A.W) in the city of Makkah. Describing various meanings of Jihad, he said that the major Jihad is the one undertaken against one’s ill-commanding self i.e. it is a process of self-reform that seeks to control base desires through a process of spiritual training. The second category of Jihad, he mentioned, is ‘Ijtihad’ whereby ‘Mujtahid’ interprets the Islamic law in keeping with the contemporary demands. The third category of Jihad is related to the social aspect, and it is Jihad by action. Through this Jihad, people endeavour to promote education and human wellbeing. It is the sum total of peaceful struggle launched to bring about positive change in society through elimination of vices and injustice. 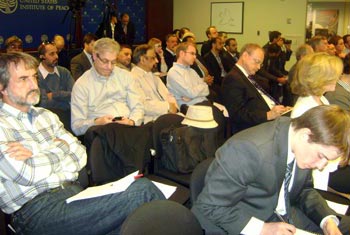 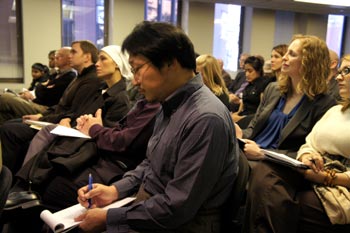 Shaykh-ul-Islam said that the fifth meaning of Jihad concerns ‘defensive strategy against aggression’. He said that it is written in the United Nations Charter that when you are under attack, you have every right to defend yourself. This is what the Holy Quran calls Jihad but it has its strict connotation by way of defensive strategy. 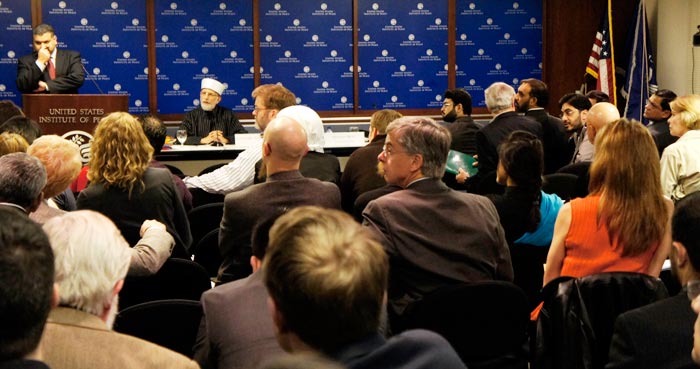 “Permission (to fight against mischief, disruption and oppression) is granted to those against whom (unjust) war is waged, because they were oppressed and Allah is doubtlessly All-Powerful to help them (the oppressed).” (al-Hajj, verse no.39)

“And fight in the cause of Allah against those who fight against you. (Yes,) but do not exceed limits. Surely Allah does not like those who exceed limits.” (Al-Baqarah, verse no 190)

He said that problem with the most of the scholars is that they fail to notice it while understanding of Jihad. They confuse the concept of Jihad with killing and lose sight of its wider meaning.

In the same context, Shaykh-ul-Islam Dr Muhammad Tahir-ul-Qadri emphasized that no individual or a group is allowed to declare Jihad on his own. The power of declaration of Jihad rests with the state. He said that the Muslims were ordained to initiate defensive war after the passage of 20 years since the Holy Prophet (S.A.W) declared Islam as the final religion. The verse no 190 of Sura Baqara says that the Muslims clinched a peace deal for their protection.

Dr Muhammad Tahir-ul-Qadri said that the Muslims fought more than 60 battles and there was not even a single battle out of 60 wherein they preempted the enemy attack. They were always forced to react in defence when wars were imposed upon them leaving them with no option but to strike back. He said that the words such as “Jihad for the sake of Allah” are also misinterpreted.

Referring to Hadith of Sahih Muslim and Bokhari, he said that when the Muslims are in a state of war, Islam has forbidden to kill women, children, patients, priests, religious scholars, farmers, traders and diplomats. This is an Islamic fundamental principle that underlines war strategy. Islam has accorded so much priority to human life and its continuity that it has strictly disallowed the Muslims from destroying crops, trees and waging an all-out war against civilian population. He said that there is complete consensus of all major schools of thought on these principles.

Dr Muhammad Tahir-ul-Qadri said that those who have wreaked havoc in the world through bomb blasts and suicide bombings are not Muslims. They belong to the Khawarij school of thought. It was the first group that attacked the fourth Caliph Hazrat Ali (RA), and founded the tradition of killing and violence under the excuse of establishing the Quranic rule. He said that there were more than one hundred Prophetic Traditions that clearly denounce the Khawarij and declare them out of the pale of Islam. These people have nothing to do with Islam any way.

According to Sahih Bokhari and Muslim, Islam fought two wars against terrorism in the first two centuries. He said that the signs of terrorists and Khawarij according to these Books of Tradition are the following:

Dr Muhammad Tahir-ul-Qadri said that jurists and religious scholars have described these signs of Khawarij in history. Their common sign is that they would resort to killing people indiscriminately by raising a banner of revolt against the government of the day. They would raise a slogan of imposing Islamic system.

He said that there is another misunderstanding about terrorists:

“So when the sacred months have passed, then kill the idolaters (for the violation of peace treaty) wherever you find them and capture them, imprison them and lie in wait for them at every place of ambush (to catch and besiege them). So, if they repent, establish Prayer and start paying Zakat (the Alms-due), then leave their way open. Surely, Allah is Most Forgiving, Ever-Merciful.” (Al-Tawbah, verse no 5)

When the Muslims got permission about their self-defence, some Western scholars wrongly translated the verses dealing with Jihad as if the Muslims equated Jihad with the killing of non-Muslims. He said that it was based on misunderstanding, while the fact remained that there is no such thing in Islam.

This sura was revealed during the ninth year of hegira when the Muslims were ordained to adopt defensive strategy. The first word of this verse is peace referring to Hudabiya Pact. None of the tribes was allowed to attack the other in the holy cities of Madina and Makkah.

Dr Muhammad Tahir-ul-Qadri said that the shared commonality between the Muslims and non-Muslims is not war but humanity. The UN has formulated its charter according to the Quranic concept. All leading jurists of Islam have interpreted ‘Dar-ul-Islam” as peaceful country in which human beings and rights are respected without any discrimination of race, colour and creed. The entire world, he added, has become One World today and none can be allowed to resort to killing others and perpetration of violence. He said that this was his message against terrorism.

Dr Muhammad Tahir-ul-Qadri said that Minhaj-ul-Quran International is making practical endeavours for the elimination of extremism and terrorism from the world. It has particularly focused its energies on the students and youths. It annually holds various programs in which the youths are imparted lessons of their religion against terrorism and extremism. Four-day Al-Hidaya Camp is a case in point.

After the conclusion of speech by Shaykh-ul-Islam, the audience asked various questions which he answered befittingly and in detail. The question-answer session continued for about an hour. The management of the US Institute of Peace thanked Shaykh-ul-Islam for his lecture.