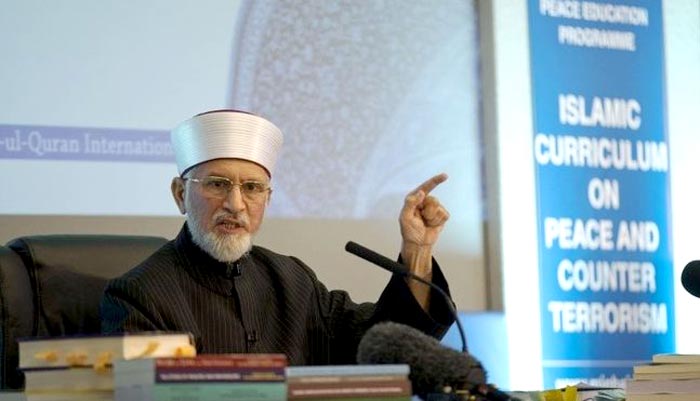 An Islamic scholar has unveiled a draft school curriculum in London that condemns the ISIL and extremist ideology, calls for British Muslims to be taught 'peace' in school to tackle radicalisation Pakistani politician and Islamic scholar Dr Muhammad Tahir-ul-Qadri hopes the ‘Islamic Curriculum on Peace & Counter Terrorism’ will dissuade young British people from joining terror organisations such as ISIL, and has claimed his work is a ‘Jihad against ISIL. Shaykh-ul-islam Dr Muhammad Tahir-ul-Qadri, the founder of the Minhaj-ul-Quran International organization, delivers a keynote speech at the launch of the Islamic Curriculum on Peace and Counter Terrorism in London, UK on June 23. The curriculum is described by the organizers of the event as a syllabus that provides study material to form the basis of educational programs and campaigns against religious extremism and radicalization, and for the promotion of peace. He now hopes the government will implement a mandatory ‘anti-radicalization’ sector to the national curriculum. Dr. Qadri said that lessons on “peace”, “counter-terrorism” and “deradicalisation” should be made part of the national curriculum in state schools. “It is essential to teach people of all ages and faiths that terrorism is a violation of Islamic principles”, he added. Dr. Qadri said his curriculum draws on the teachings of the Prophet Muhammad ‘based on love and tolerance and coexistence and togetherness’, in order to dismantle what he considers the flawed ideology of terror groups. The 900-page curriculum is designed to halt the spread of extremism that has radicalized thousands of Europeans including hundreds from Britain who have joined forces with IS militants in Syria and Iraq