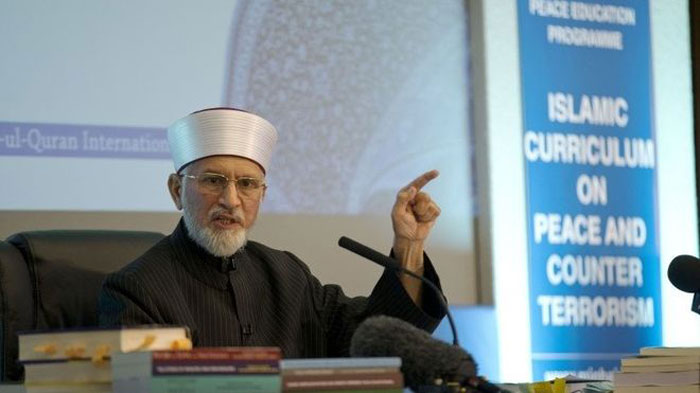 LONDON: Pakistan Awami Tehreek leader Dr Tahir ul Qadri has launched a “counter-terrorism” curriculum in London on Tuesday, to rebut the message of militant groups such as Islamic State (ISIS) and stop young people becoming radicalized and heading to Syria.

Qadri, who led his followers to lay siege to the Parliament in Islamabad last August, said that he wanted his 900-page curriculum, containing theological and ideological arguments to undermine extremists, to be taught not just at mosques and Islamic institutions, but also at schools across Britain.

“We want to make clear that all activities being carried out by ISIS or any other terroristic and extremistic organization either in the name of God or religion or establishing any kind of Islamic state by acts of violence … are totally in violation of the Quran and Islam,” he told Reuters.

“The children who are going to [join] ISIS and fighting over there and leaving the comforts of their own British society, they are going to hell,” said Qadri, who five years ago issued a fatwa declaring that terrorists and suicide bombers were unbelievers.

“They are our children. They are our sons and daughters. We have to save the future of mankind.”

Asked how his academic work could counter this, Qadri, head of the global Minhajul Quran religious and educational organisation, said that 50 young Britons and 50 others in the rest of Europe were being trained to take his narrative online.

“This will be a two-way war, not only through books in the study circles, mosque and schools, but on social media too,” said Qadri who plans to take his curriculum to Pakistan, India, across Europe and to the United States.