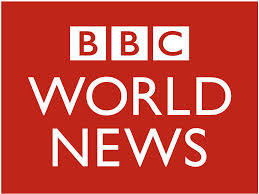 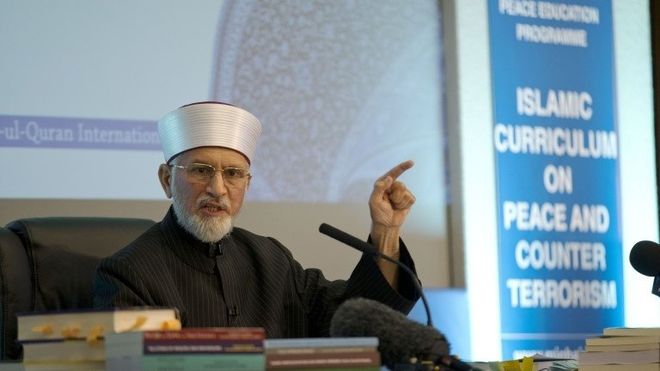 A Pakistani Islamic cleric has launched a "counter-terrorism" curriculum to combat the message of Islamist extremist groups such as Islamic State (IS), in an effort to help stop young people becoming radicalised.

Muhammad Tahir-ul-Qadri says he wrote the curriculum - in English, Arabic and Urdu - to counter and undermine the extremists' arguments that they speak in the name of Islam.

It was unveiled at a launch in London on Tuesday.

"This isn't a process that started yesterday. That radicalisation began to happen 30 years ago," he says.

"You can see this gradual process of grooming by extremist groups such as IS and we must address that, and the arguments used by IS to justify their criminal, terrorist activities.

"You have to tell young people that IS and others are giving them the wrong interpretations of Islamic concepts such as jihad.

"Many young people don't have the scriptural or textual knowledge to interpret their religion properly and Islamic State exploits the emotions and the idealism of the young, although this ideology has nothing to do with the Koran.

"So this curriculum goes to the source material of Islam, and answers the questions young people are asking."

At least 700 Britons are estimated to have travelled to Syria and Iraq, many of them to join IS. 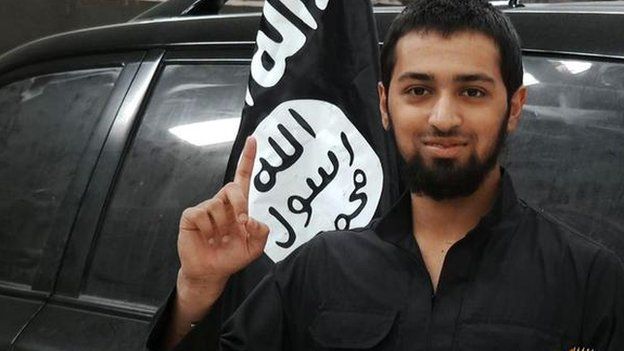 Talha Asmal, 17, from Dewsbury, is thought to have become the UK's youngest-ever suicide bomber

Five years ago, Mr Qadri issued a fatwa or teaching declaring that suicide bombers were unbelievers.

He is keen to help prevent more young people sharing the same fate as the young Britons who have died after joining IS, and would like his curriculum to be taught not just at mosques and Islamic institutions but used in state schools across Britain.

"This curriculum is for parents, teachers, and students, so that young Muslims may become aware of the false interpretations being spread by IS.

"But this is not a battle of 'you versus us' because the young people who went to fight for IS are our children, our future, our sons and daughters.

"We are working for cohesion and for inclusion, not to exclude or divide, and we want to make clear that the violent and extreme activities being carried out by IS in the name of religion are totally in violation of the Koran and Islam."

Mr Qadri, head of the global Minhaj ul-Quran religious and educational organisation, plans to take his curriculum to Pakistan, India, the Middle East and the US.

The move comes a few days after Prime Minister David Cameron called on Muslim communities to do more to stop young people being radicalised by groups such as IS - also known as ISIS - saying some Muslims were quietly condoning extremist views.

He was criticised for those comments by Baroness Warsi, the first Muslim to serve in a British cabinet. 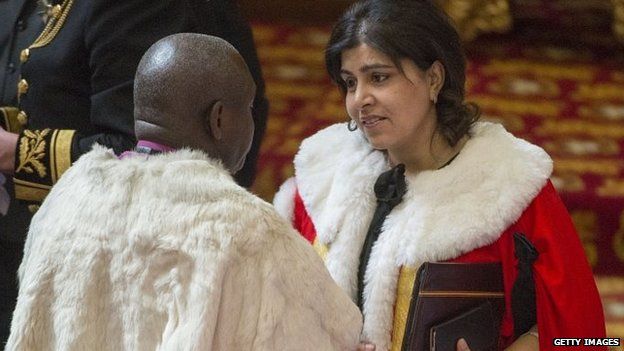 Baroness Warsi quit the government in 2014 over its Gaza policy

She spoke at Tuesday's launch, telling an audience of imams, police, politicians and academics that the government should consider using the curriculum in all schools.

"The British Muslim communities are a pivotal part of the solution," she says.

"British Muslim communities do not quietly condone IS - they condemn it and this curriculum has been created to help ensure that people have the necessary material to challenge the ideological arguments that ISIS are producing.

"I think it is important for government to now engage with Muslim communities and engage with this curriculum as well.

"What you're seeing here today is people of all faiths and all theological backgrounds within Islam getting together to say 'we condemn ISIS', and it's important to acknowledge that and all the work that is being done up and down the country."

However, will Muslims in Britain and elsewhere be listening to Mr Qadri or following his curriculum?

Matthew Wilkinson, a Muslim theologian and educational philosopher based at UCL Institute of Education, and director of research project Curriculum for Cohesion, believes the launch marks a small but significant step "because it has come from the heart of the Muslim community".

It has some "from a significant and renowned scholar of Islam, and addresses the problem of Islamist violent extremism from within the theological traditions of Islam... and that's important", he says.

Mr Wilkinson believes the process of de-radicalisation will take a long time, perhaps a generation or two "of good education and political solutions".

However, some other Islamic scholars fear Mr Qadri's political work in Pakistan may detract from his overall message, and suggest that his influence could be limited to his own tradition and may not reach out to those within Islam who scorn the Sufi tradition.